Welcome to our mahjong games page. Here you will find a selection of fun free mahjong solitaire games that you can play on almost any device. They are online games so no download is required, just click the game you want to play. You can also make them fullscreen and there are no in game ads. Mahjong Solitaire is a challenging single player puzzle game where you must remove all of the tiles from the board to win. In a classic game of mahjong solitaire Tiles can only be removed if they are fully exposed (nothing on top of them) and there is a gap to the left or right. In a classic game of mahjong solitaire, much like card solitaire, it is not always possible to clear the board. That’s what makes it so satisfying when you do. After first being introduced in the 1980’s mahjong solitaire has risen in popularity to become one of the most popular online games. It has spawned hundreds of different spin-offs and variants. Scroll down to read about the history of Mahjong/Mahjong Solitaire and also learn how to play some of the different versions. 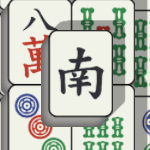 Mahjong A HD Mahjong game that tracks your wins. Can you get a perfect game? (no shuffles used) 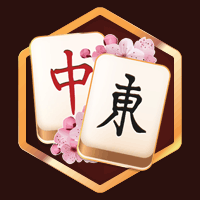 Mahjong Classic A Mahjong Solitaire game with multiple boards to choose from.

More Mahjong Can you complete all 36 tables in this casual Mahjong Solitaire game? 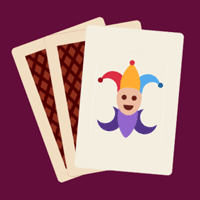 Flower Mahjong Connect A popular variant of mahjong solitaire with a garden theme.

The History of Mahjong

Legend hints that Mahjong was originally invented around the time or Confucius (551 B.C. to 479 B.C.). It is traditionally a 4 player game played using a set of 144 tiles. This multiplayer version of the game is still extremely popular in eastern countries and is enjoyed by casual and competitive players alike. The best players compete in Poker style tournaments for huge pots of prize money. Multiplayer mahjong also has a following in Western countries too and there are many Mahjong Clubs if you are interested to play with others.

The first known written account of Mahjong outside of China was by an American anthropologist in 1895. Further accounts of the game were reported and growing interest saw the game begin to be imported in to the US by retailer Abercrombie and Fitch. It was an Engineer called Joseph Park Babcock who really helped the game gain traction in the US however. In 1912 he was sent to Soochow, China to represent an oil company. While there he and his wife became big fans of the game. He developed a simplified version and created a book called “Rules of Mah-Jongg” also known as “The Red Book”. He succeeded in his goal to bring the game to the US masses as it quickly grew in popularity and in 1924 the Standardization Committee of the American Official Laws of Mah-Jongg was formed of which Babcock was an integral member.

In addition to the multiplayer version there is also a single player version of Mahjong called “Mahjong Solitaire”. This has achieved mass popularity in the Western world and is now far more popular than the multiplayer version. Most people refer to it just as “Mahjong” which does cause some confusion and the majority or people looking for mahjong games online are looking to play mahjong solitaire. All the mahjong games on FreeGames.org are mahjong solitaire games (including some interesting and novel variants). The first computerized version of Mahjong Solitaire was created by Brodie Lockhard in 1981 for the PLATO system. It uses the same 144 tiles as traditional multiplayer Mahjong. Lockard claims to have based the game on an ancient Chinese children’s game called “Demolish the Tile Turtle”. The origin and age of Demolish the Tile Turtle are unknown. Brodie released his version of the game for free (my kind of guy). Control Data Corporation later released an updated version that was an online paid game. In 1986 Brodie worked with Activision on a new version called Shanghai and this is the one that achieved mass success and popularity for the game. It was released on Amiga, Macintosh, Atari and Apple computers and achieved more than 10 million sales - a very large amount for the time. The next most significant version to be developed was Taipei which Microsoft bundled in to the Microsoft Entertainment Pack for Windows 3.x in 1990. Later premium versions of windows also bundled in a game known as Mahjong Titans which created a new generation of fans. Since then web games have taken over with many people discovering and playing Mahjong Solitaire online on various websites. There are now dozens of variatons of the game available online. Below we show how to play some of the most popular variants and recommend some good examples of the different types.

How to play Mahjong (Mahjong Solitaire)

The goal in Mahjong Solitaire is to remove all of the tiles from the board. This is achieved by tapping matching tiles:

It is only possible to match “free” tiles. Free tiles are tiles that can be accessed from the left or right. Imagine that you need to slide them left or right to remove them. In the image below only the tiles on the far left and far right are considered free.

Free tiles must not have tiles on top of them. In the example below (and the previous one) I have highlighted the tiles that are free. Many mahjong games also highlight the free tiles, for instance in this mahjong game that I made you can toggle that feature: Mahjong 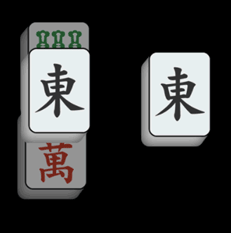 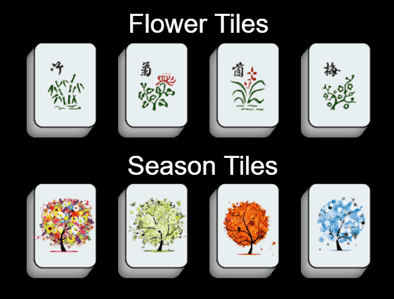 When you first start playing your goal is to simply match the tiles. As you become more experienced however you will find yourself developing strategies to increase your chances of winning. An important technique is to focus on making the inner most tiles accessible and removing blockages that might lead to trouble later in the game. For instance if there if there is a long row of tiles it is a good idea to focus on that as it may cause you to get stuck later on. Also try to remove the top tiles as soon as possible so you can access the tiles underneath.

How to play Mahjong Connect

Mahjong Connect is an interesting variant of Mahjong which opens some great new puzzles. It may seem confusing the first time you play but after a short while it will make sense. Just like Mahjong you must eliminate all of the tiles by finding matching pairs. To remove them it must be possible to link them using no more than three straight lines. See the image below for an example. 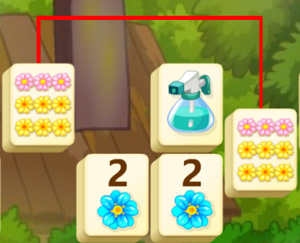 Tiles can also be connected with one or two lines as shown in the following images too. 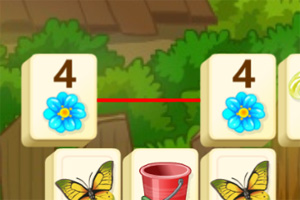 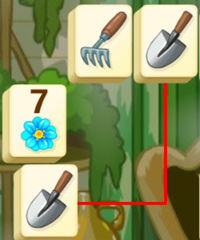 The connections can come from any side of the tiles - the top, bottom or sides. To connect two tiles simply tap one, then tap the other that you believe can be connected. Here are some great examples of Mahjong Connect games for you to try:

How to play Mahjong Slide

Mahjong slide is a fun and popular variant of Mahjong Solitaire. Similar to Mahjong the goal is to remove all of the tiles from the screen by matching pairs. The difference is you must identify a path to slide the matching tiles in to each other so they collide. Sometimes there is already a path but other times you must move other tiles out of the way to create a path. To move a tile left click the tile, move your mouse in the direction you want it to go and then release. The tile will slide until it collides with another tile or the edge of the play area. 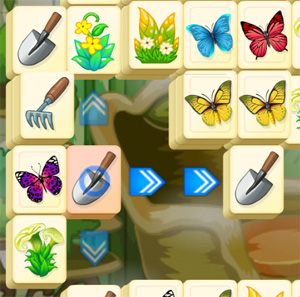 How to play 3D Mahjong

3D Mahjong adds another dimension to Mahjong - literally! In 3D Mahjong games the tiles are cubes and they create a 3D structure. You can eliminate the tiles by matching pairs. Just like Mahjong you can only select “free tiles” to create matches. In this case a tile is considered free if it is on corner ie. the shape must have 2 adjacent sides visible. Simply tap two matching free tiles to remove them. You can also rotate the board by pressing the arrows at the bottom of the screen or using the arrows on your keyboard if you are playing on a computer. It is vital to rotate the board to find matches on all sides. 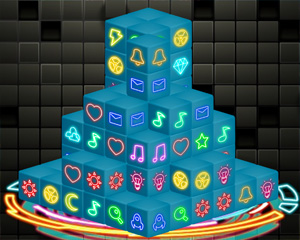